This strategy borrows the grid logic from the stepgrid strategy and combines it with a trend monitor that constantly evaluates the market on 15m, 1h and 4h timeframes.

Besides offering a lot of options for customizations, stepgridhybrid has:

In it's pure form, stepGridHybrid is basically like stepGrid with one difference: sell amounts are based on remaining buy volume below the current price. This means that it is possible to skip buy steps (either intentionally or by accident), as soon as trading resumes at a lower level it will not attempt to sell units bought at higher rates unless the overall break even price is reached.

When you run stepgridhybrid, this is the kind of trading behavior to expect: 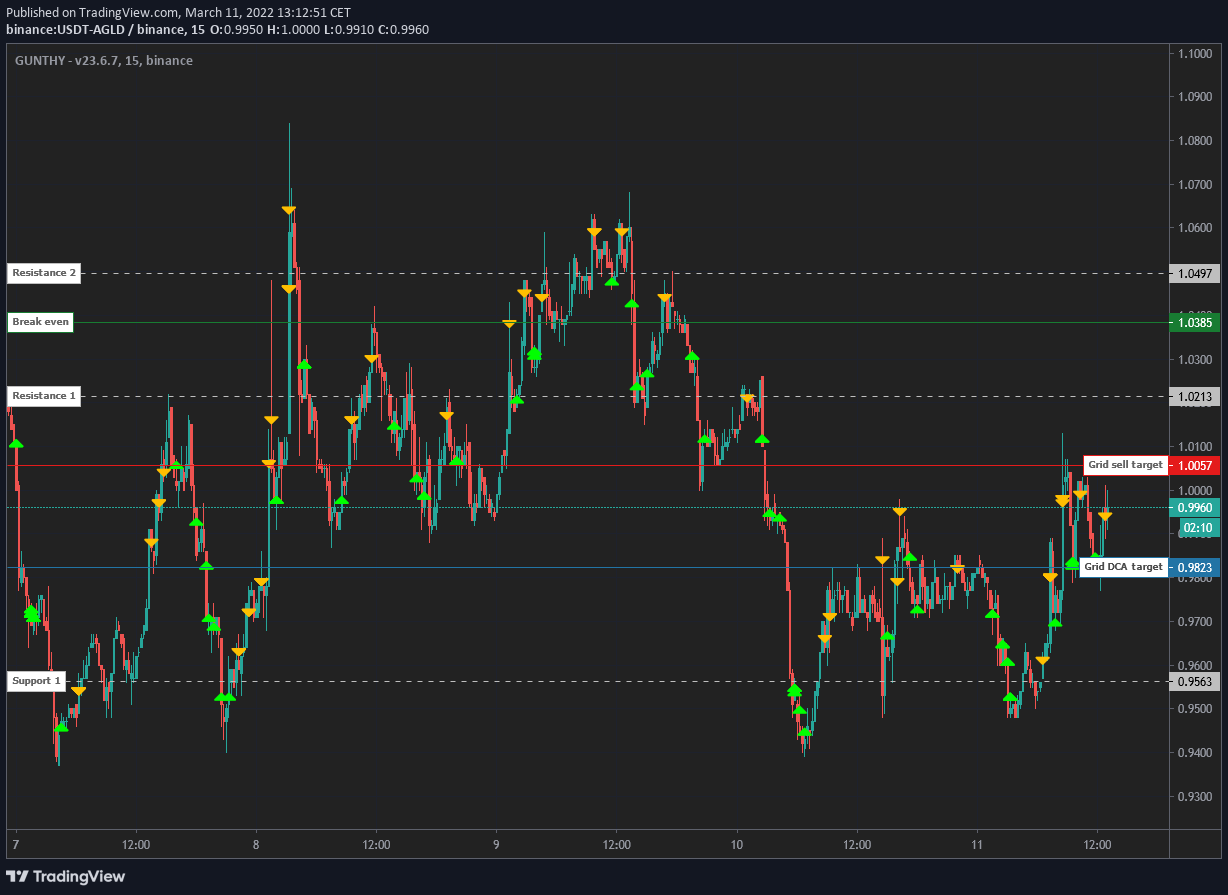 Let's break down what actually happens: 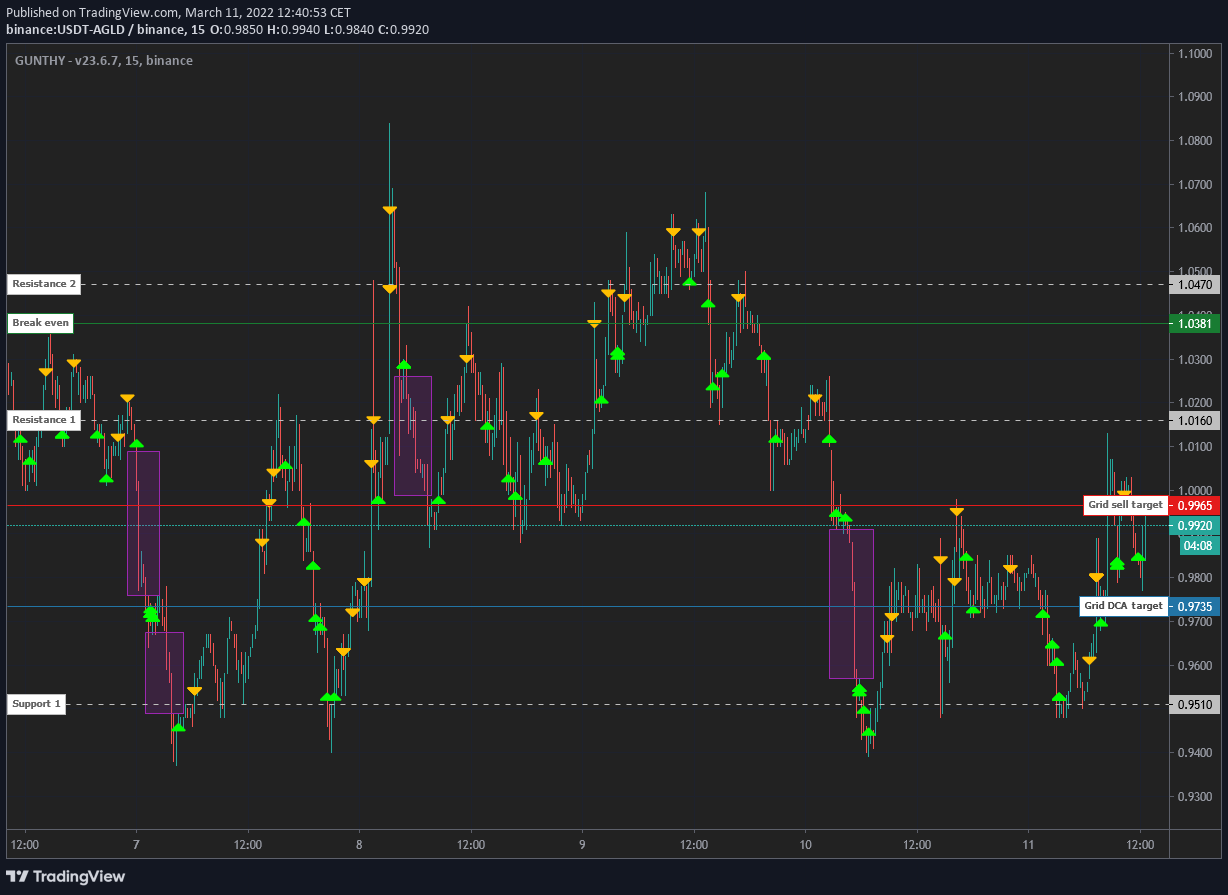 The marked zones in the screenshot above are intentionally skipped buy steps. There are different triggers for skipping steps, some of them are settings configurable, some are hardcoded. 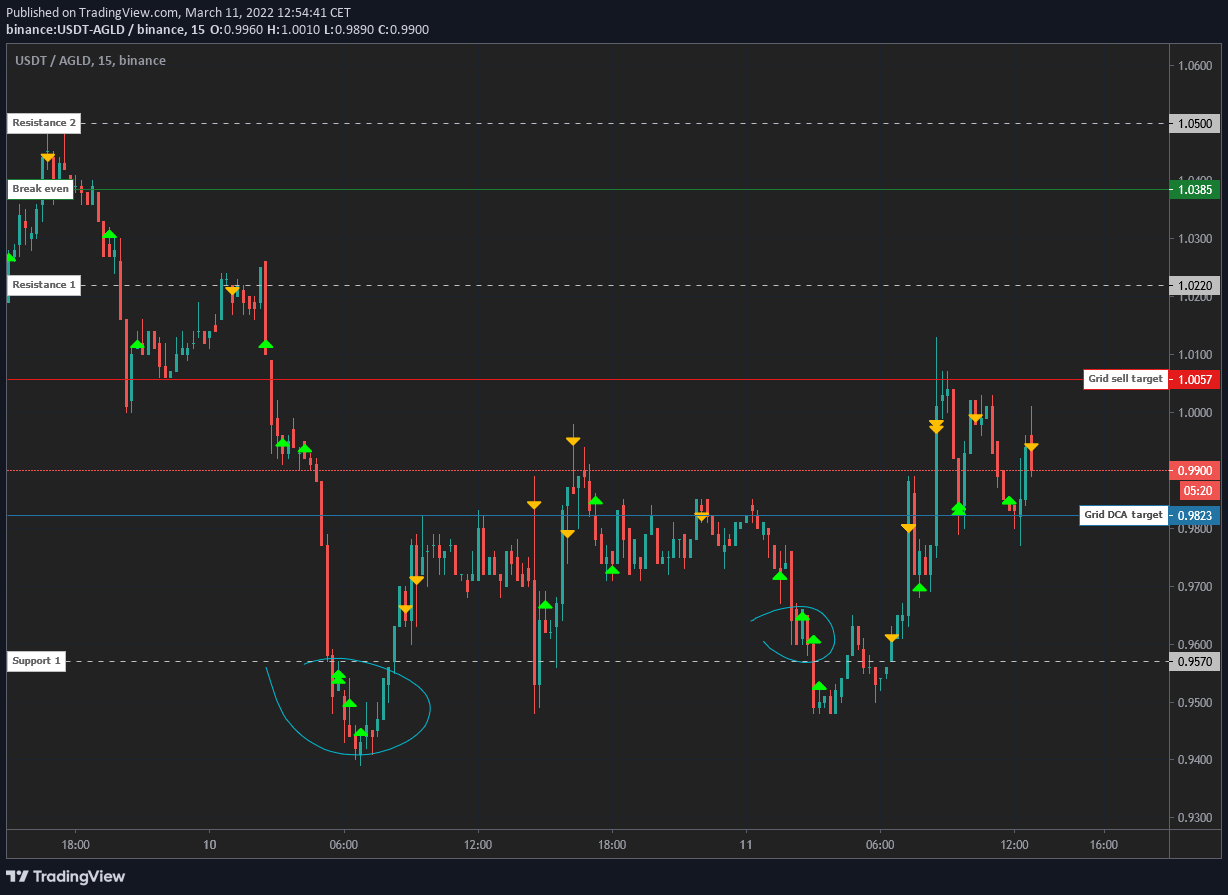 The marked zones in the screenshot above are examples of additional buy orders that were triggered by conditions detected in the trend module. Such orders do not move the then active grid targets.

Settings for trading modes mainly define when to start and stop grid trading. By default the strategy runs in an unrestricted mode, allowing it to open a new trade anytime.

By using one of the available trading modes, opening new trades is restricted by the entry and exit criteria of the selected mode. Meaning that as soon as all assets have been sold, a new trade can only be opened when the mode allows for it.

Modes are meant to be used one at a time, enabling multiple modes on a single pair can lead to unexpected behavior.

Trading modes can be extremely restrictive. Sometimes there can be several weeks or more between two 'entry signals' detected on the same pair.

Manually set a price range in which new trades are allowed. Optionally a stop limit price can be used.

Starts trading when the entry conditions for one of a collection of TA fractals is detected, disallows opening new trades when one or more exit scenarios have been detected. Think of 'fractals' as an attempt to detect a variety of bullish reversal patterns.

Attempts to look for pairs that are currently in an uptrend on the 4h timeframe, and in the lower area of a volatility zone. Allows trading from near to the bottom to the top of an expected volatility range.

This mode includes a stop in profit mechanism that automatically gets activated near the top of the zone, as well as an optional stop loss trigger.

When one of several pullback scenarios is detected on the 4h timeframe, new trades are allowed until 15 minutes after the scenario loses validity.

This mode automatically increases the invested amount for the first few trades.

In this strategy, the invest per buy order is not static.

The user setting for trading limit is the base amount for several multipliers in the strategy, deviations between 0.3x and 2x trading limit are possible.

Besides settings mentioned on this page, no other strategy setting has any effect on stepgridhybrid.